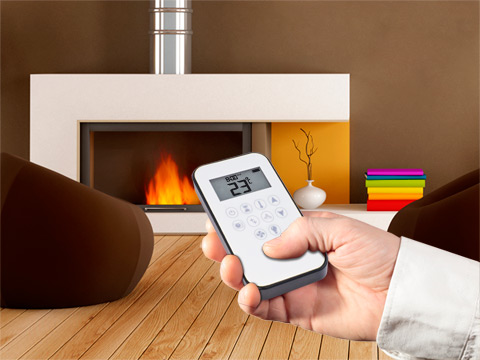 Inspiration can come from anywhere, in different forms, and even from a combi­nation of things. The inspi­ration for Mertik Maxitrol’s new SYMAX remote control system came from identi­fying an important need in the gas hearth market and the Bauhaus philosophy (German school of building and design).

“The Bauhaus philosophy is not to deter from artistic simplicity in form or function, even if a product is to be mass-produced”, says Maxitrol President Bonnie Kern-Koskela. “This philosophy of simple and symmetric visual design with uncom­pli­cated function fit perfectly with what we envisioned for our new SYMAX remote control system.”

In the summer of 2011, Kern-Koskela decided it was time to offer customers of the GV60 gas combi­nation control something they had wanted for quite some time: A remote control so intuitive that the user would need minimal training to operate their gas fireplace.

Mertik Maxitrol’s research showed that with high-end remote controls, homeowners often don’t use many of the functions available to them because of the diffi­culty of programming the handsets. By devel­oping the SYMAX system that combines simple operating logic and dedicated symbols, Maxitrol believes customers will use more of the available functions and actually use them more often.

“The SYMAX system combines new technology and a modern design with ease of operation”, says Barbara Happe, Mertik Maxitrol’s senior devel­opment engineer. “Instead of scrolling through a confusing menu, each function can now be activated by touching a symbol.”

It’s true that many remote controls on the market have few buttons and require extensive programming to operate. The SYMAX system uses a simple Look and Touch logic.

Simply find the symbol for the function you want, and touch that symbol. The functions homeowners use most often, turning the fire ON and OFF, changing the flame height up or down, and placing the fire in thermo­static mode, are all accom­plished by touching a single symbol.

The SYMAX 4‑symbol control is perfect for the homeowner who simply wants to turn the fire ON and OFF and manually increase or decrease the flame height. As a perk it includes a Countdown Timer, which counts down from a set time, and then turns off the fire.