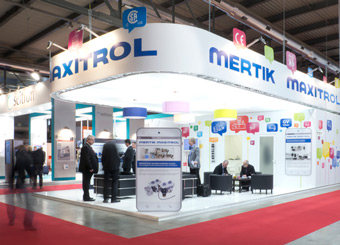 Mertik Maxitrol and affiliate Maxitrol Company recently exhibited at the 39th Mostra Convegno Expocomfort in Milan, Italy. The Mostra Convegno is a multi­na­tional trade fair for the plumbing, heating and air-conditioning, and renewable energy indus­tries.

Mertik Maxitrol Managing Director Larry Koskela had this to say about the show:

“The Mostra Convegno is the most inter­na­tional of all trade fairs with visitors from all over the world. Existing customers and new prospects from Eastern and Western Europe, Australia, South America, and North Africa visited our stand. We had many quality meetings, and there was a general feeling of optimism about the world economy after four to five years of stagnation. This is a good sign for 2014.”

“The key to our success was the pre-show prepa­ration of setting up meetings with target companies, and the highly visible location and eye catching, contem­porary design of the stand, which garnered many compli­ments and attracted new prospects to visit us.”

Held from March 18–24 at the Fiera Milano, the Mostra Convegno saw more than 2,000 companies exhibit with almost 50% of them being from outside of Italy. And the more than 150,000 attendees repre­sented a 3% increase from 2012. The Mostra Convegno 2014 also saw a substantial increase in attendees from India, China, United Arab Emirates, the Baltics, and a number of countries from the African continent including Algeria, Ethiopia, Ghana, Libya, and Nigeria.