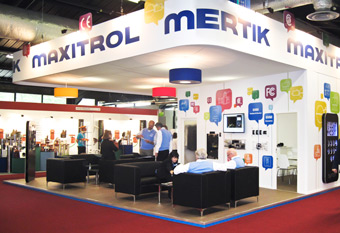 “It was by far the best attended show, for both visitors and exhibitors, that we’ve seen in years. And the mood of the visitors and exhibitors was mostly positive, a true indicator of the UK’s improving economy,” said Mertik Maxitrol Vice President of Sales, Thomas Wilkerling, about the recent Hearth and Home Show.

Mertik Maxitrol and affiliate Maxitrol Company exhibited June 8 to 10, 2014 at the 18th annual Hearth and Home Exhibition held in Harrogate, England. A global trade fair for the fireplace industry, the exhibition includes gas, electric, and solid fuel fires, stoves, and barbecues as well as fireplace acces­sories.

Mertik and Maxitrol showcased the Symax remote control system. The Symax is used with the company’s GV60 – for years the UK’s most popular remote ignition and control system for gas fires. Already a huge hit with customers, the Symax system has added the Eco Mode, which gives the gas fire a live, ever-changing look. Another attention grabber at the show was the battery powered E-Flame control system for the wood and solid fuel stove indus­tries.