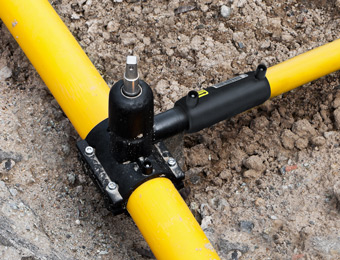 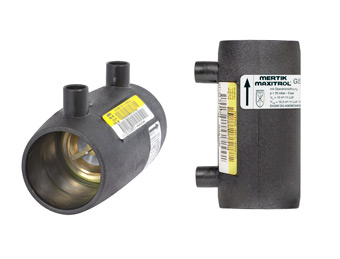 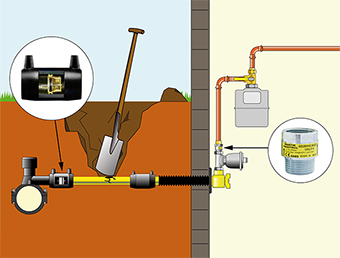 In practical, real-world appli­ca­tions excess flow valves will open and close only a few times during the production process and when the gas system is tested. When in service, excess flow valves remain in the open position. It is extremely unlikely that a drop in the closing flow rate will occur during long-term operation.

Mertik Maxitrol has used the materials that make up the SENTRY GS in various controls for more than 65 years. The housing and spring are made of brass and stainless steel, and the closing unit is either brass or aluminum. The pressure springs are made of corrosion resistant stainless steel and are sized for dynamic loads of > 107. The springs have been evaluated and undergone testing for a minimum of 100,000 opening and closing cycles.

Gas utilities build under­ground gas networks with an estimated service life of 50 years. Although excess flow valves have not yet been in service for 50 years, perfor­mance testing has been done to quantify their longevity through laboratory and field tests. Mertik Maxitrol SENTRY GS excess flow valves have been examined under both static and dynamic condi­tions.

Many factors can affect the service life of an excess flow valve such as the natural gas used, moisture in the gas, temper­ature fluctu­a­tions, movement of the earth, or conta­m­i­nants intro­duced into the system during instal­lation. The type of service pipe also affects an excess flow valve’s service life. Underground service pipes are usually made of polyeth­ylene, cast iron, steel, or a combi­nation of materials.

Before the conta­m­inant was intro­duced into the pipe, leakage was less than 2 l/h. Corundum caused leakage at a rate of 25 l/h, and leakage exceeding 1 m3/h was measured when long or coiled splints of the synthetic material became lodged in the seat of the excess flow valve.

Despite the conta­m­inant preventing the excess flow valve from closing completely, the amount of gas leakage was greatly reduced. (The SENTRY GS is designed for low-pressure drop, and its internal flow path allows conta­m­i­nants to pass through.)

The German utilities testing involved installing various types of excess flow valves into gas service lines located in various locations throughout Germany. Many of these areas had previ­ously used town gas, which contained more moisture and impurities than the natural gas used today. The objective was to see how different types of conta­m­i­nants in the service lines affected the SENTRY GS.

Five SENTRY GS25… excess flow valves were installed in a natural gas service line and removed 6 months later. On inspection it was found that aside from slight leakage in the closed position (2 l/h), the excess flow valves still functioned properly. Two of the SENTRY GS25s were reinstalled and left in the service line for 6 more years. Test results once again revealed slight leakage in the closed position (8 l/h).

Mertik Maxitrol also performed a condensation/water climate test for electro­chemical corrosion (the test was performed according to German Standard DIN 50017). SENTRY GS excess flow valves were exposed to 100 % humidity at 104 °F (40 °C) for an 8‑hour period. The test pieces were then subjected to < 100 % humidity at room temper­ature for 16 hours. This process was repeated for 10 days.

Results showed that even with some corrosion on the surface of the brass and aluminum compo­nents, the closing flow rate remained within toler­ances. Residual deposits on the O‑ring did result in slightly higher leakage, but it was also within the tolerance of 3 l/h. GDF Suez conducted compa­rable climate tests on Mertik Maxitrol’s excess flow valves with similar positive results.